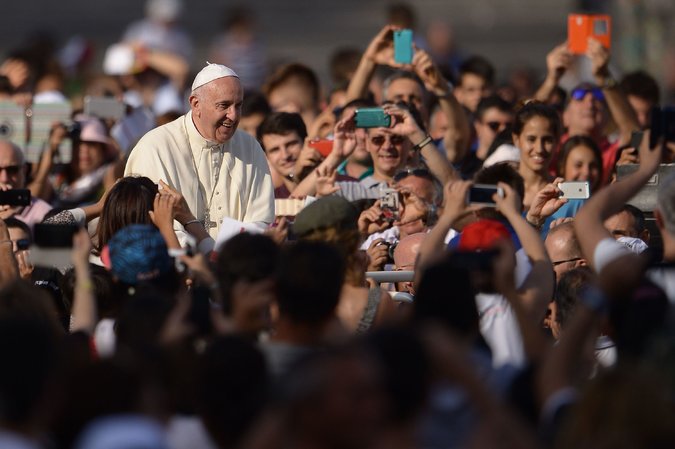 His most stinging rebuke is a broad economic and political critique of profit-seeking and the undue influence of technology on society. He praised the progress achieved by economic growth and technology, singling out achievements in medicine, science and engineering. But, he added, “Our immense technological development has not been accompanied by a development in human responsibility, values and conscience.”

Central to Francis’ theme is the linkage between the poor and the fragility of the planet. He rejects the belief that technology and “current economics” will solve environmental problems or “that the problems of global hunger and poverty will be resolved simply by market growth.” He cites finance as having a distorting influence on politics and calls for government action, international regulation and a spiritual and cultural awakening to “recover depth in life.”

Amid the broad themes, Francis also touches on a wide range of specific topics, from urban planning (calling for better neighborhoods for the poor) and agricultural economics (warning against the reach of huge agribusinesses that push family farmers off their land) to conservation and biodiversity (with calls to protect the Amazon and Congo basins), and even offers up small passages of media and architecture criticism.

“A huge indictment I see in this encyclical is that people have lost their sense of ultimate and proper goals of technology and economics,” said Christiana Z. Peppard, an assistant professor of theology, science and ethics at Fordham University in New York. “We are focused on short-term, consumerist patterns, and have allowed technological and economic paradigms to tell us what our values ought to be.”

Above all, Francis has framed the encyclical as a call to action, imbuing environmental protection with a theological and spiritual foundation. He praises the younger generations for being ready for change and said “enforceable international agreements are urgently needed.” He cited Benedict in saying that advanced societies “must be prepared to encourage more sober lifestyles, while reducing their energy consumption and improving its efficiency.”

“All is not lost,” he wrote. “Human beings, while capable of the worst, are also capable of rising above themselves, choosing again what is good, and making a new start.”